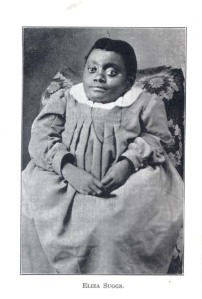 liza Suggs was the daughter of Free Methodist minister James Suggs. Suggs was ordained a deacon by B.T. Roberts in 1879 and ordained an elder by E.P. Hart in Kansas in 1884. Eliza was one of his younger daughters, who contracted a severe case of rickets at as a baby. Her bones were frail and she relied on her sisters to care for her. She was often seen riding around in a baby carriage. She weighed about fifty pounds and her height was only thirty-three inches. Yet, her disabilities did not diminish her call to ministry. She attend Orleans Seminary in Nebraska and was an officer for the Orleans Women’s Foreign Missions Society. She also wrote for the Free Methodist magazine Missionary Tidings.  Her autobiography Shadows and Sunshine is one of the earliest published accounts by an African-American woman and contains important historic details about her parents experience as slaves. In addition, her strong support of temperance issues is evident in her poetry. She lived vicariously through her writing, which has now been recognized by scholars as providing a significant historic contribution to understanding the African-American experience in the nineteenth century.

The Death of the Old Year.

by Eliza Suggs.
O, the blessed Holy One,
Hath come within my heart to dwell,
And the good that He has done
My tongue can never tell.
He took away my stony heart,
And put a heart of flesh therein.
And now O sin thou hast no part
But Jesus dwells within.
He has bidden sin depart,
And has entered my heart’s door
Saying, “Now my child thou art,
Go, and sin no more.”

by Eliza Suggs
Here sits a dear old lady
In her rustic chair,
Sunbeams gently falling
On her snow-white hair.
There is a sad, sad story,
Written on her face
Sorrow and woe, long, long ago,
Have left the sad lines you trace.
Chorus:
She had a drunken husband!
After all these years,
Golden hair is silver now,
Dim those eyes with tears.
She had a drunken husband
Waiting him to reform.
He went away one bitter cold day
He now fills a drunkard’s grave.
Far, far away McDonald
Went in revelry.
“Stay, I pray you husband,
Do not go away.
That is the road to ruin,
That is the road to sin.
Says the word of God, in Heaven above,
No drunkard shall enter in.
“Just one glass, McDonald,”
Said his comrades dear.
“Just this once to please us
A social glass of beer.”
“Just this once to please you
I take my first glass now.
I’ll take no more, dear wife, I’m sure,
I make to you this vow.”
That was his first step downward;
On and on he went.
Powerful grew the habit
Downward he was bent,–
Drank ’till he raved in madness,
Then came the fatal day
With a curse and stare and clutching his hair,
His soul then passed away.
When the sad tidings reached her
She fell, they thought her dead,
Then there came a doctor,
“A broken heart,” he said.
That’s why she’s sad and lonely,
Waiting for him in vain;
He went away one bitter cold day,
And never returned again.

One thought on “Eliza Sugg’s Poetry”