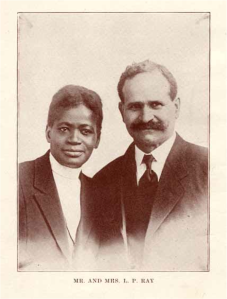 Emma Ray was born a slave in Springfield, Missouri. After the Civil War her mother died, leaving her father to care for their large family by himself. Her early life was filled with periodic schooling and working as a domestic servant in white, Southern households.  After marrying L.P. Ray at age twenty-eight they moved around the country looking for work. Both Emma and L.P confessed to being apathetic towards religion during this period, and L.P. was an alcoholic, spending their income at the saloon and leaving Emma little money to pay for household experiences. After their conversion they joined the African Methodist Episcopal Church, and Emma became the president of the Seattle Colored Woman’s Christian Temperance Union branch. She devoted her life to promoting temperance issues, helping the poor, convicts, drug addicts and anyone else who needed help. She was drawn to the Free Methodist Church because of their support for the Weslyean belief in entire sanctification and their social activism and reform efforts in the Seattle area. While her autobiography contains numerous hymns and poems that have meaning to her, she did not write poetry herself. However the poem “Twice Sold, Twice Ransomed” serves as Ray’s life motto and theme for her book.

..Affectionately inscribed to Mr. and Mrs. L. P. Ray, by their sister in Jesus, Mina B. Spear.

Seattle, Washington, March 30th, 1925.
A land of sunshine, soft blue skies and bloom
Without, to charm the eyes, the heart to cheer;
Within, a filthy, crowded auction room,
The ribald jest, the oath, the heartless jeer.
And huddled close a brooding dark-skinned band
Of human chattels, waiting to be sold–
Children and parents, husbands, wives, they stand
To satisfy man’s guilty greed for gold.
And from that cursed block, with downcast eyes,
Her baby girl pressed closely to her heart,
A gentle mother steps, and bravely tries
To thank her God–they are not sold apart.
A few years pass; the roar and shriek and din
Of war. And blood of brothers dyes the sod–
For blood must e’er atone for guilt and sin,
And cries have long assailed the ear of God.
The time was ripe, the bond-man should go free.
God had a man, gentle and strong and brave,
Who willingly a Joshua would be,
Who dared to strike the shackles from the slave.
His life the forfeit. But at last he gained
The goal, his heart had sought for many years.
Freedom and justice, peace and mercy reigned,
Union restored, though bathed with blood and tears.
The years slip by; and in a northern state,
Of fir and fern, where sparkling water plays,
The slave babe–woman grown, with chosen mate
In search of home and happiness, now strays.
They chose a city close beside the Sound
Builded, like Rome, upon her many hills.
Whose air and water, verdure, fertile ground,
Sing loud of health and freedom from life’s ills.

Rejoicingly, these “dusky sons of toil”

Look on the scene, and boast their “jubilee.”

Their’s for the taking–water, trees and soil,

With all their stores–and dream that they are free.
And still, poor slaves were they, “Sold under sin,”
Her master, envy, vanity and greed;
His, rioting, tobacco, beer and gin,–
Worse bondage than from that they had been freed.
Like bondage all our race has sometime known,
Helpless to save ourselves from utter loss
Till one was found–God-man, who could atone,
Who nailed our fetters to His blood-stained cross.
They gladly “rose and followed,” “at His call,”
Who paid their ransom, made them free again.
And for His service they “forsook their all,”
And He has made of them “Fishers of men.”
Twice born, twice sold, and twice redeemed and free,
Yet still are “love slaves” “going out no more.”
For at the breaking of the “Jubilee”
They craved the “ear-mark” at their Master’s door.

“The fight is on, the trumpet sound is ringing out,
The cry ‘To arms’ is heard afar and near;
The Lord of hosts is marching on to victory,
The triumph of the Christ will soon appear.
CHORUS
“The fight is on, O Christian soldier,
And face to face in stern array,
With armor gleaming, and colors streaming,
The right and wrong engage today!
The fight is on, but be not weary;
Be strong, and in His might hold fast;
If God be for us, His banner o’er us,
We’ll sing the victor’s song at last!
“The Lord is leading on to certain victory;
The bow of promise spans the eastern sky;
His glorious name in every land shall honored be;
The morn will break, the dawn of peace is nigh.”