My ideological critique of “Courageous” is written from the perspective of a Christian feminist who fully supports the belief in Biblical gender equality. As Benjamin Titus Roberts, the founder of the Free Methodist Church, said in his book “Ordaining Women”: 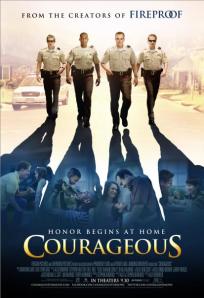 “The greatest domestic happiness always exists where husband and wife live together on terms of equality. Two men, having individual interests, united only by business ties, daily associate as partners for years, without either of them being in subjection to the other. They consider each other as equals; and treat each other as equals. Then, cannot a man and woman, united by conjugal love, the strongest tie that can unite two human beings, having the same interests, live together in the same manner?” (p.36)

If you don’t agree with my position that is fine, all I ask is that you read the film critique in the spirit of intellectual engagement.

Courageous attempts to address some important social issues. Even mainstream newspapers such as The Los Angeles Times acknowledge that absentee fathers are a problem in American society. However, the problem is so complex and has a variety of sociological factors which cause it that it’s difficult to address the issue well in a film. Especially a film that has chosen to focus not on a single family but on a large ensemble cast which makes strong storytelling even more important. Thus, two primary issues emerge in the film. The first issue is stereotyping. Whether intentionally or not, the Kendricks’ resort to some very disturbing stereotypes of Latino families. Secondly, the Kendricks’ are Southern Baptists, a denomination not known for its support of Biblical gender equality. While I am not arguing that we don’t need strong fathers, I am concerned with how the film elevates the role of the father and makes the wives in the film secondary characters. Good parenting requires two strong parents to lead the home –not one.

Javier Martinez (Robert Amya) is the one man in the film who stands out and who, I feel, is used too much for comic relief. The other three men in the film are cops, but they live in middle class suburbs and don’t appear to be hurting for money (with the exception of Shane Fuller’s character Kevin Downes who resorts to theft to make a little extra money). Unlike the other men Javier struggles for work. He is Latino and a construction work (can we be any more stereotypical?).  Javier’s family lives in a working class neighborhood and in small, slightly rundown looking house.

He is continually laid off at the beginning of the film and trusts God to provide him employment. His faith in God is a joy to watch and through a series of events he ends up working for Adam Mitchell (Alex Kendrick), helping him build a shed in his backyard. Adam introduces Javier to the rest of the gang and they “adopt” him into their group, helping him get a steady job at a factory.

One of the most disturbing scenes in the film is when Adam, Kevin and Javier are headed to lunch and the two cops (Adam and Kevin) have to respond to a gang related call. Javier begins joking about how he was in the Snake Kings gang and the two unsuspecting white cops believe him. Javier cracks up and says the Snake Kings were nothing more than his three brothers chasing snakes in their neighborhood. A fairly harmless story, but it begins to cross a line when the cops have to take a gang member arrested on drug charges back to jail before lunch. They ask Javier to pretend he is a real gang member and freak out the teen gangster. Javier sits in the back of the cruiser muttering about what he will have for lunch in Spanish. No one understands what he is saying and the teen in the back with him begins to freak out, thinking Javier is going to kill him. Everyone gets a good laugh out of the deal, but at the expense of Javier. Disturbing scenes like this continue. When decisions have to be made and Adam asks what Javier’s opinion is the other guys say “Oh, you know he’ll go along with whatever we say.” It often seems that the filmmakers attempt to make Javier fit into white American culture is at the expense of his own cultural heritage. Other disturbing things with Javier’s interplay with the rest of the cast include Adam asking him he had “work papers” before hiring him to build his shed and Javier’s wife Carmen (Angelita Nelson) worry that they would have to “go back” if Javier lost his job. The stereotypes go on and on, and Courageous’ portrayal of minorities is often painfully oblivious to how offensive the film is actually being. From the perspective of stereotyping alone I wouldn’t feel comfortable taking non-Christian friends to see the film.

While the primary theme of the film is encouraging men to be hands on fathers (a commendable goal), the film continually puts women in the background. I firmly believe that God expects both parents to take leadership and responsibility in the home and that the husband is not to bear this burden alone. Yet, Courageous continually pushes the idea that men should step forward and shoulder the burden for the whole family. This theme is very subtle and if I hadn’t taken six pages of notes while watching it I might have missed the many places the Kendricks’ throw this idea of male-headship into the script.

The theme of male-headship becomes clear after a heartbreaking tragedy happens to Adam Mitchell’s (Kendrick) family. Adam’s wife Victoria comes to her husband in tears and asks him to “make sense” of the tragedy for her. I’m sorry, but shouldn’t she be going to God with that question? Her husband, a simple human being, can’t answer the question for her. However, Adam feels he’s failed the family and goes to their pastor for counseling. Next question – why does only Adam need to go to the pastor for counseling? His wife is clearly emotionally distraught. Shouldn’t they be going together for help and support? No, it’s up to Adam to fix the problems and heal the family. The family tragedy leads him to develop a resolution about being a good father. At first, asks his friends just to support him in his endeavor and then eventually to join him in making the resolution. The pledge begins with the following:

“I resolve before God to take full responsibility for myself, my wife and children. I will love them, protect them, serve them and teach them the statues of God as the Godly leader of the home.” It then goes on to include pledges to seek justice, mercy and love, ending with Joshua 24:15 “As for me and my house we will serve the Lord.”

On the surface it is commendable to pledge to seek mercy, justice and service to God. However, several things about this pledge disturb me. First, this resolution should have been tailored for both parents. Why only the husbands (the answer is obvious if you believe in male headship, but since I don’t; I can’t accept the fact that women weren’t included). Second, the Kendricks’ subtly disguise the male-headship premise in this pledge by including elements we can all agree upon – that mercy, justice and love are crucial elements to being a Christian parent. The single line “as the Godly leader of the home” is easy to miss in the larger text of the resolution.

The final scene only further emphasizes the Kendricks’ belief that the men should lead and the women follow or act as a “helper” to their husbands. Adam Mitchell gets in front of his mega church congregation and continually uses the pronoun “I” for a very long monologue about the role of fathers. “I will do this.” “I will protect my family.”  “I will lead my family”, etc. The wives only smile tearfully in the audience. They aren’t even on stage with their husbands who stand up their proudly and the macho leaders they are supposed to be.

I’m sorry but I cannot endorse a film where responsibility for parenting is put only on one parent’s shoulders. The Kendricks’ acknowledge in Adam’s monologue that women try to hold it together without a father present but they can’t do it. They also briefly mention the importance of mentors when a father is absent. Although both of these points are true and deserve mentioning, there isn’t enough attention drawn to these elements in the film. The role of mentors deserved more than a passing reference.

The emphasis on male-headship makes this film problematic and not something anyone who believes in Biblical equality should be shelling out dollars to see.

A daily selection of the best content published on WordPress, collected for you by humans who love to read.

Promoting meaningful connection between churches and families of kids with disabilities for the purpose of making disciples of Jesus Christ.