In the past year more than ever it’s become clear that the Duggars’ show 19 Kids and Counting might be just another extreme religious sideshow for TLC, but for the Duggars it’s a way to share their worldviews with a large audience, usually hovering around a million viewers per episode. The Duggars have made the news for their support of scandal ridden Doug Phillips and Bill Gothard’s ministries and for their decision to begin to publically campaign for Tea Party candidates, as well as the topic they’ve always made the news for- their extremely large family.

With all the media attention, it’s become clear that the rhetoric of the Christian Patriarchy movement, or Quiverfull as the Duggars often get called, has gradually become more acceptable to mainstream evangelicals. Perhaps because of the attacks by what many conservative Christians will term the “secular media” or perhaps because of the serene family environment the Duggars’ depict on their popular show. Among their expanding fan base—evangelical Christians.

In recent years the Duggars have been invited to speak at Focus on the Family1 and to visit the set of the popular Christian film Courageous.2  In addition, a special episode titled “Duggars: All You Wanted to Know” features soft-ball questions from visitors to the Focus on the Family headquarters.3 As rhetorician Helen Sterk emphasizes, patriarchy has controlled biblical interpretation for centuries, resulting in the vast majority of Christian co-cultures seeking biblical interpretation and spiritual leadership in an almost exclusively male context.4

As the primary evangelical family organization, Focus on the Family’s support of the Duggar’s lifestyle legitimizes not only male headship, but the framing of opposition to birth control as a “sanctity of life” issue.5 Placing the Quiverfull lifestyle in a pro-life context helps a fringe Christian theology gain mainstream evangelical acceptance, as the rise of pro-life and anti-contraception presidential candidate Rick Santorum clearly illustrates.6 By manipulating biblical interpretation and positioning the Quiverfull ideology as respect for the “sanctity of life,” these organizations are, as Rebecca Chopp puts it, “denying access of language” to women and using language to instead promote an extreme socio-symbolic order. 7

Such Christian use of popular culture as a promotional platform for religious rhetoric is not a new occurrence. It is only natural that a media format that has become an intrinsic part of the American experience is ideal to promote a religious ideology. As Quentin Schultze notes, “Television programming is religious because its stories are the shared narratives of American culture.”8 However, while the Duggar narrative is appealing to a broad audience, it also reinforces a conservative Christian worldview on family hierarchy. Television programs such as 19 Kids and Counting often contain a traditional family structure, with all other family structures portrayed as the “before conversion” example of secular society.9 When women are portrayed on religious programming, it is usually in conjunction with domestic roles and never as independent from the family structure.10 Michelle Duggar is relegated to the role of housekeeper, teacher, and caretaker, while the husband leads the dominant family narrative. The subtle themes regarding a woman’s role in the home, marriage, and society are the dominant narratives of the show. However, to the casual observer, these themes are not immediately discernible in a show that seems the picture of idyllic family life.

Until recently, the Duggars’ narrative painted only a positive picture of the Quiverfull movement, but these types of idyllic depictions of Quiverfull life can mask potential danger. The premature birth of their nineteenth child due to Michelle Duggar’s preeclampsia in December 2009 has brought the Quiverfull lifestyle under increased scrutiny in the mainstream media. Baby nineteen, Josie Duggar, was born three months premature and the lives of both mother and baby were in danger immediately before and after the birth.10 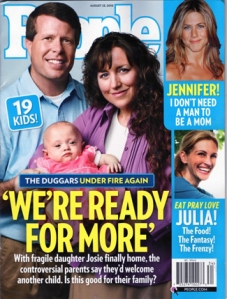 Even given Michelle and Josie Duggar’s health complications, both Jim Bob and Michelle announced they were open to having more children if it was God’s will.11  Michelle Duggar openly draws comparisons between her life-threatening complications in delivering Josie and the suffering of Jesus Christ. In the season eight finale, “Duggars All You Wanted to Know,” Michelle takes John 15:13 out of context and equates her health complications to Christ’s love for his disciples and willingness to sacrifice himself for their salvation. Michelle says, “Looking into the face of Josie, I’d do it again. I would do it again. I would . . . As I thought long and hard about that (her health), I realized there was no greater love than this, that a man would be willing to lay down his life. I think as a mom and a parent, you’d be willing to do that for your child, even the child that’s not here yet. I would be willing to do that.”12

Jim Bob and Michelle view Josie’s health complications as another way to share their faith. They firmly believe that God could have healed her instantly, but chose to allow Michelle to go through a difficult pregnancy and Josie to be born early to glorify God. As Michelle noted, during the months Josie was hospitalized, she would always cite 2 Corinthians 12:9 to explain to people that, “My (God’s) grace is sufficient for thee; for my strength is made perfect in weakness. Most gladly therefore will I rather glory in my infirmities, that the power of Christ may rest upon me.”13 The Duggars’ response to Josie’s birth once again illustrates their strong belief in pre-ordained roles. Michelle is destined to be a mother and have babies, no matter what the health risks, because that is the biblically-mandated role for women.

True to their word that they wanted more children, the Duggars announced that Michelle was pregnant with baby number twenty at the end of season eight in November 2011. Michelle said, “If God sees fit to bless us with another little one, then He ultimately will be the one in control.” 13 However, by December 2011, Michelle had miscarried and given birth to a stillborn baby girl they named Jubilee Shalom. The family invited further controversy by holding a funeral service for the baby and passing out photos of Jubilee’s hand in the hand of her parents. The Now I Lay Me Down to Sleep Foundation, a non-profit photography organization specializing in death photos of infants, took the photos for the Duggar family.14

While the Duggars maintain that the photos were for family use only, passing them out at the funeral is another indication of how far they will go to promote their belief that every child is a gift from God and every pregnancy is God-ordained. A few weeks after they denounced the photos of Jubilee being made public, the family made them public themselves on their website with an audio letter from Michelle to Jubilee. The photo of Jubilee’s tiny hand in the hand of her mother is displayed as Michelle talks in voice-over: “We were so thankful to God when we found out we were expecting you. So often in society babies are looked upon as a problem, trial, or responsibility, but God says babies are a blessing. We do not believe that babies are a bother, a headache, or a financial drainer, or a career interrupter…You were only here with us such a short time. It’s an awesome thought to me that you fulfilled your life’s purpose in such a short time.”15 Michelle’s audio letter to Jubilee makes a strong statement about the family’s views on children, gender roles, and a specific predestined plan for every individual. It is one of the strongest statements the Duggars have publicly made regarding their religious beliefs and is directly in line with Quiverfull and Christian patriarchy ideology.

Yet, despite the news coverage of Michelle Duggar’s last two pregnancies, there is still a lack of public knowledge about the darker aspects of the Quiverfull movement. More research is needed to fully understand the stress this lifestyle can have on a woman’s physical and psychological health. For instance, Andrea Yates, the Texas mother who received national attention in the United States for drowning her five children in a bathtub in 2001, is an extreme example of the mental and emotional strain the Quiverfull lifestyle can have on a woman. Few people realize Yates and her husband subscribed to the movement’s beliefs,16 and this further emphasizes the need to highlight the ideology of this movement. While women such as Michelle Duggar and Andrea Yates seem willing to comply with the Quiverfull lifestyle, there is a difference between accepting a lifestyle because of a choice and being coerced into a lifestyle based on religious propaganda.

Yates and the Duggar women often do not learn about life beyond Quiverfull and how the emphasis on a literal interpretation of the Bible places pressure on them to continue in the Quiverfull lifestyle in order to maintain their Christian faith. In the lives of many Quiverfull families, there is little separation between religious salvation and their natalist lifestyle. So, while the Duggars attempt to paint a peaceful picture of the Quiverfull life, all is not as it seems, as is evidenced by the underlying narrative in the Duggar story.

This blog entry has been published in a longer form in the peer reviewed journal The Journal of Religion and Popular Culture 22 (Fall 2010), under the title “TLC and the Fundamentalist Family: A Televised Quiverfull of Babies, and as an up-dated book chapter in Media Depictions of Brides, Wives and Mothers.

11. Robert Abelman, “The Depiction of Women in Religious Television,” Journal of Communication and Religion (September 1991): 3–4.

18. Luchina Fisher, “The Duggar Family Copes with the Loss of Jubilee,” ABC News, last modified December 19, 2011, http://abcnews.go.com/blogs/entertainment/2011/12/duggar-family-copes-with-loss-of-jubilee/; NILDMTS: Now I Lay Me Down to Sleep, “About Us,” accessed April 12, 2012, http://www.nowilaymedowntosleep.org/about_us/.