Over the past month I have made some amazing discoveries about both Clara Wetherald and Ida Gage and for the next few posts I’m going to share more of their stories. The more I find out about these women the more humbled I become. They were amazing, amazing people. 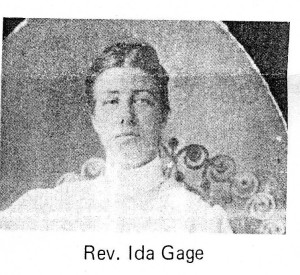 Ida Gage converted to Christianity when she was 23. She had married Charles Gage before she became a believer; by 25 she felt a call to preach. What first attracted me to Ida Gage was her address at the 1890 Free Methodist General Conference. She wasn’t even a delegate, just attending the conference from Ohio. Yet, she felt compelled to speak out about her ministry and faith in front of all the delegates – there were only two women delegates at this conference, Anna Grant and Clara Wetherald. The women were greatly outnumbered by the male delegates. However, Ida wasn’t timid. She declares to the conference that if they take away her privilege to preach “you make me an infidel.”  A powerfully, bold statement to make in front of the delegation. Ida’s right to be a licensed evangelist wasn’t being questioned, but women’s push for ordination was being debated and ultimately defeated at this conference. Ida was a strong, independent woman. As I’ve noted before it appears Ida and Charles Gage eventually separated and divorced. Ida was the type of woman who I can see telling Charles “You are either with me in ministry or against me.” While I still haven’t found an official divorce record, her separation from Charles is very apparent in her grandson’s biography.

Glenn V. Tingley was a famous Christian and Missionary Alliance minister and Ida’s grandson from her oldest daughter Edith. Glenn began one of the earliest Christian radio programs Radio Revival in 1929 and was a founder of the National Religious Broadcasters Association. For the first few years of Glenn’s life Ida raised him. Born in 1901, his parents Edith and Nelson Eugene Tingley suffered from numerous health issues in Glenn’s early life. He describes her grandmother by explaining, “Ida Gage was of such staunch character that those around her knew if she had arrived at a decision in her own mind, the die was cast.” (p.13-14) Thus, I don’t think it’s unrealistic to see her telling Charles she was called into ministry and would follow that call, no matter where it led her.

Ida’s persistence also led Edith to Christianity. As a young girl, about 17 or 18, she had fallen in love with Nelson Tingley, but he wasn’t a Christian.  As Glenn retells his parents love story he quotes his grandmother as saying, “Gene Tingley seems to be a fine, respectable young man with obvious talents in a business career – but he is not converted. Edith, it is impossible for me to give you permission for any closer friendship with a man who is not a Christian.” While these words are Glenn’s recollection of what his grandmother said, it clearly shows Ida did not want Edith following in her footsteps. Ida married Charles before turning to Christianity and plainly that marriage didn’t work out. She didn’t want the same thing for her daughter. When Ida refused to allow Edith to marry Gene the family was in Toledo, Ohio. Ida was preaching a series of revivals and at one of the services Edith went up to the altar and became a Christian. Yet, she wouldn’t give up Gene. When the women who were praying with her asked if she was ready to give up her unsaved boyfriend she refused, saying God would have to take her, Gene Tingley and all. Fortunately within a week Gene was also converted. Thus, in May 1900 they were married and much to Ida’s delight Gene felt a call into ministry. With Ida’s encouragement, he went to Spring Arbor Seminary. This is the period of Ida’s life that had remained very blurry. Spring Arbor has few records going back to the early 1900s, but her grandson’s biography and Ida’s Free Methodist obit confirm that she did serve as the matron of the girls’ dormitory at Spring Arbor Seminary around 1907. During that time Glenn was about six and lived in the girl’s dorm with his grandmother. Glenn attended the Spring Arbor Seminary’s grammar school. At age six, Glenn also became a Christian. He recounts the story in vivid details:

“Rev. B.J. Vincent, the head of the seminary and one of the men whom I was named, was preaching on that occasion. There in the front row my friend Paul Kenworthy and I were trying to amuse ourselves. I am sure Mr. Vincent had to be an accomplished preacher to be head of the seminary and later as a bishop of his church, but I can’t recall my opinion of him that night. The sermon left no particular impression on my memory. But one thing is certain – God spoke to me!” (p. 18)

Because of his father’s health his parents moved to California after attending Spring Arbor only a year. His father continued his education at the Los Angeles Seminary (also a Free Methodist institution). Glenn remained behind in Michigan, living with Ida and his aunt and uncle. Glenn’s memories of his grandmother are vivid. He was born in 1901 and would have been almost an adult by the time Ida died in California in 1915. He never talks about Ida’s death in his biography. He skips over that time period. Ida’s second marriage to Jesse Wood in 1912 is also not mentioned. Yet, her grandson’s biography brings added depth to Ida’s life and ministry. An influence on her grandson, her son-in-law and daughter, Ida was a powerful preacher, a loving mother and grandmother, and strong, spirited woman. I always knew I liked Ida Gage and the more I find out about her the more I love her.

Glenn’s biography is called “Against the Gates of Hell: The Story of Glenn Tingley” as told to Judith Adams. I hesitate to call it an autobiography, although it really probably should be called that. Glenn told the story to Judith Adams who transcribed and helped edit the book for him, but it’s written entirely from his perspective and in first person.

One thought on “Ida Gage’s Life: As Told by Her Grandson Glenn V. Tingley”