The 1890 Free Methodist General Conference debate about the ordination of women is one of the most important moments in Free Methodist Church history. The debate about women’s roles still goes on today, making it crucial that we understand our history and our position on this issue. No true Free Methodist should ever say that our denomination supports male headship. If they do they need a firm scolding and to be sent home to read B.T. Roberts “On Ordaining Women” and numerous other documents the denomination has put out throughout the years. Yet it is disturbingly surprising how few people actually do know and understand the Wesleyan stance on Biblical gender roles, which is why I’m continuing to dig into the debate from the 1890 conference.

The argument against women in leadership often centers on the notion that women are physically and mentally incapable of serving in the same way men are. You hear this argument all the time when women try to run for high political office. Comments such as “Women are too emotional to make decisions dealing with national defense issues” or “Because of women’s menstrual cycle they are incapable of thinking rationally for one week a month, which leaves the leadership structure weak and vulnerable.”  These are flimsy arguments based on centuries men trying to maintain their social power by convincing women that they were better prepared for caretaker positions. While there is nothing wrong with being a caretaker, the position should be chosen not forced upon you.

The argument about women’s leadership capabilities came up at the 1890 conference and B.T. Roberts eloquently smashed it to bits with the story of Joan of Arc:

“They say it is contrary to a woman’s nature. What is there contrary to their nature? They preach and pray – I wish men would pray.

There’s not a spot in earth or heaven,

There’s not a task to mankind given,

Without a woman in it,

And you may take employments that are the most uncongenial to woman and the most contrary to her disposition, and yet in spite of all the prejudices, in spite of all the considerations, there are times when she rises superior to them all and shows her general manhood. More than 450 years ago in the history of France there was a time when they were carrying on war with England. The English army had overrun France. They had the possession of Paris. They had possession of almost all the large towns except Orleans. They had almost possession of the country. In their crisis there was a girl, a peasant girl, one who was noted for her piety and for going to church. That devoted girl said that God had laid it on her to save France and crown the 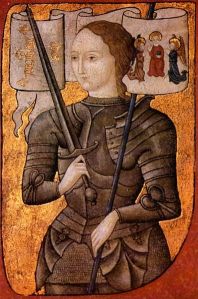 king. Her father said that if she attempted to do it he would drown her. He would command his sons to drown her.; if they wouldn’t he would drown her himself. But she was sent away to an aunt, and met some of the officers, and she finally succeeded in getting one of the officers to take her to the king. She said: ‘I am going to do a man’s work, and want man’s clothes and a man’s armor.’ She knew nothing about war. She put on man’s dress and armor. They brought her to the king and told him her mission. She told them to give her men at arms, with them she went on Orleans, and in a few days Orleans was taken; and in a short time the king was crowned at Rheims and the English were expelled from the country. And what treatment did that girl receive? Why our English forefathers burnt her at the stake as a witch. Do you know that one of the greatest churches of the day has a woman at its head – The Church of England? She is the leading power,  — the pope of that church so to speak. If you want to put a woman in the president’s chair I say I have no object to having a woman preside there. I have no objection to it at all. Let her stand on the platform, and you will have no right to complain, no matter what her nationality or race.” (p.112-113).

Our prejudices and opinions about gender roles need to be re-examined. What are we basing our opinions upon? Are they edifying and supportive of our position as Christians or do they run contrary to everything else we believe? Unfortunately the opinions about women in leadership have not changed in over a 100 years. Next week I’ll post some of the other delegates’ remarks to Roberts about why women shouldn’t be in leadership. The reasons are eerily similar to arguments still heard today. How can we hope to move forward, keeping Christianity relevant for today, if we are caught in the past and cannot get over this hurdle?

*All B.T. Roberts quotes are taken from the book Passion of the Founders, Ed. By Gerald Coates for the Marston Historical Society.

I am a communication scholar and activist with a Ph.D. in communication studies from Bowling Green State University and an M.A. in communication from Spring Arbor University. My area of research is rhetoric and gender roles in evangelical and conservative Christian culture. I'm an assistant professor in communication arts and sciences at Adrian College. All thoughts and opinions are my own and do not represent my employer or any organization I am a part of. View all posts by freemethodistfeminist

Who is The Free Methodist Feminist?

Memories From a Pandemic

Revitalizing the Christian imagination through painting, poetry, music, and more

The Coolest Comics in Michigan & Ohio

A daily selection of the best content published on WordPress, collected for you by humans who love to read.

Promoting meaningful connection between churches and families of kids with disabilities for the purpose of making disciples of Jesus Christ.